Ockams is a startup focused on building innovative products.

We implement algorithms that deliver end user value. Our main area of interest is distributed ledger technology and blockchain interoperability.

David built one of the world's first social networks (Collegester - "The Facebook Effect" page 79). He then led the engineering of Advertise U! for 10 years. Recently, he rebuilt Collegester into a shared economy platform for short-term stays on college campuses. He also developed a ride-sharing application that used Facebook Connect API to pull user data. David holds a Computer Science & Mathematics Degree from University of California, Irvine.

Rasheed started his career at Johnson & Johnson as an IT analyst in 2004. After 3 years of rotating through J&J IT departments, he left to launch his first start-up Advertise U! During this time, he provided the strategic marketing to launch: Cassie (music), Bumble (dating) and online fundraising for President Obama. He later became interested in blockchain after visiting Coinbase in 2014. Rasheed is a graduate of the University of California at Irvine with a B.A. in Economics. 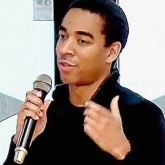 Developers, have a good idea for a collaboration? Review our executive bios and let's build the decentralized future together.

Where to Find Us